skip to main | skip to sidebar

Who's Afraid of Postmodernism? 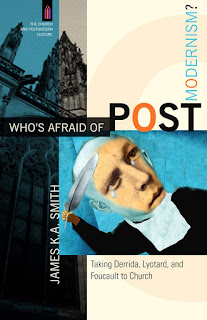 In Who's Afraid of Postmodernism James K.A. Smith engages his reader with humor and wonderful accessibility with the purpose of clearly differentiating between the popular, or what he calls "bumper sticker" understanding of Postmodernism and the scholarly understanding, as well as narrowing the gap between the two. Smith helps his reader get a handle on the gist of Derrida, Lyotard, and Foucault's commentaries of Postmodernism, and provides his thoughts on both the benefits of each philosopher's criticism of Modernism as well as his own criticism of what he perceives to be the errors of Derrida, Lyotard, and Foucault's proposals.

If all this were not excitingly useful enough, the best part of the book comes as Smith proceeds to do exactly as he says he will do in his clever subtitle, and takes Derrida, Lyotard, and Foucault to Church, a thing which many are afraid to do. Smith grabs hold of the positive criticisms each philosopher gives and applies them to the Modern Church in hopes of holding out a vision for the Church in which she might break free of the glittery trappings of Modernism and bravely step forward into a truly post-modern existence. I stress truly postmodern because the major difference between pop-Postmodernism and Postmodernism is that the former is not actually post-modern at all, but is rather hypermodern -- a phrase coined by Middleton and Walsh in their book on Postmodernism: Truth Is Stranger Than It Used To Be. That is to say, society is more hypermodern than it is postmodern insomuch as the phenomenon we experience called relativism (strange truth) is modern, not postmodern, because relativism is the result of a Cartesian equation of epistemology multiplied by negative one (or worse, zero).

What!? OK, let me back up. Rene Descarte equates knowledge with certainty, therefore modern epistemology (how we know we what we know) is based upon that of which we are certain. This sounds familiar, doesn't it? How do we know something? By discovering the cold, hard facts. Science. Empiricism. However, after years of dining at the table of modernity, the chair of certainty has been pulled out from under us; in fact, it has disappeared entirely! The fall causes us to question whether we can be certain of anything, and we look around at the world with despair from under the table and resolve that if we cannot be certain, we cannot know. Knowledge still equals certainty. We are living on the other side of the same coin of Modernism. (For more see my post Sex & TV.)

Well, all that was a bit more than I intended to say, but needless to say, I enjoyed this book and while I don't agree with all Smith has to say, I recommend it to anyone who might be interested.
Posted by reneamac at 11:04 PM

Well, not being as deep atm as mason - all I can think to say is the "Rene Descarte bar joke":

After finishing one beer, Descarte is asked by the bartender if he would like another. Descarte replies, "I think not" and poof - he disappears.

See what else I'm thinking about: